Collingwood School is a Round Square Global Member, along with 90 member schools on five continents. The common goal is structured around developing the IDEALS: internationalism, democracy, environment, adventure, leadership and service.

Round Square owes much to the heritage of Kurt Hahn, who founded two original member schools, Schule Schloss Salem in Germany, with Prince Max of Baden, and Gordonstoun in Scotland.

Both schools committed to equipping youth for leadership and service in a democracy by helping them to prepare for life despite hardships, dangers, and emotion of the moment.

A pupil of both schools, Jocelin Winthrop Young, later headmaster of Anavryta school, had an idea to found a permanent association of schools that shared in these beliefs, and whose students were prepared to provide practical support to communities in need, as Salem’s pupils had done after the earthquake at Argostoli in the Ionian Islands in 1954.

In 1966, King Constantine of the Hellenes, a former pupil of Anavryta, chaired a meeting of the first seven schools that would form the association, later named after the Round Square building at Gordonstoun, where the first conference took place in 1967.

Since then, countless students have taken part in conferences, service projects and exchanges and continue to carry the spirit of Round Square in them.

For more information on the history and heritage of Round Square, visit here. 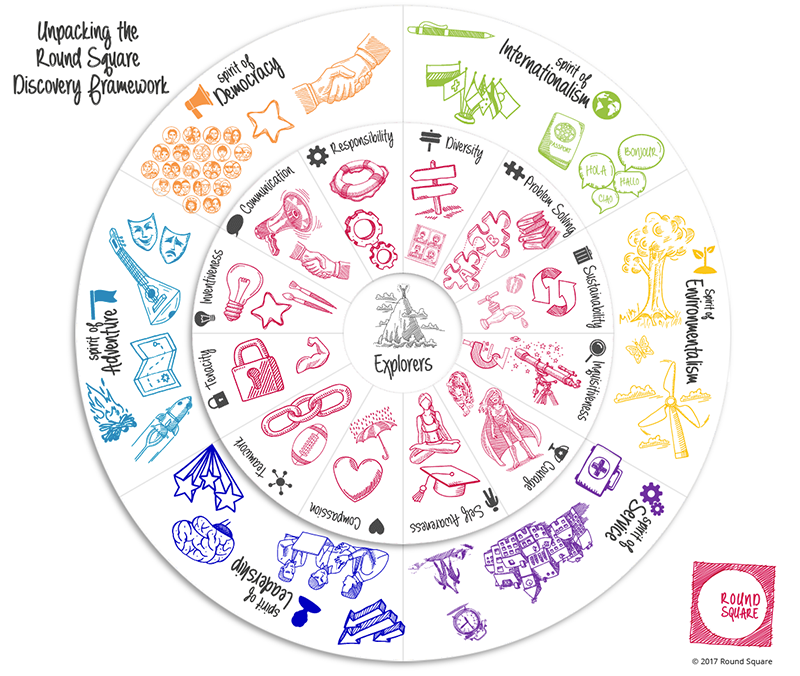 Round Square schools are characterized by a shared belief in an approach to education built around six themes, our IDEALS, drawn from the theories of the educationalist Kurt Hahn.

The Round Square IDEALS underpin our Discovery Framework, which supports schools in developing and structuring holistic programmes that build character, competencies and life-skills in our students.

The Round Square IDEALS provide a common platform, shared by all schools in our network, around which we can collaborate, swap and share learning resources and participate together in joint activities such as conferences, exchanges and academic projects.