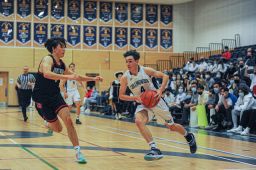 Brek Ball and Gabriela Dorey won the Ellis Shield.  Brek played on four different teams this year and was a key member of all four teams.  Gigi played field hockey, basketball and mountain biked as well.

The Pedca Award recipients were Nic Wrixon and Mo Kelly.  Nic was a star member of the senior basketball team for three years and also played soccer.  Mo was a star for the field hockey, basketball and netball teams and also ran track for four years.

Not surprisingly Gigi, Brek, Mo and Nic all share the same traits - hard-working, tenacious, humble and always led through example rather than words.  Congratulations to these four amazing student-athletes. 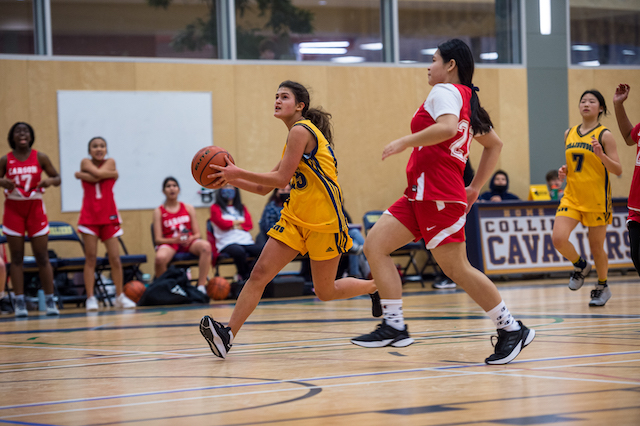 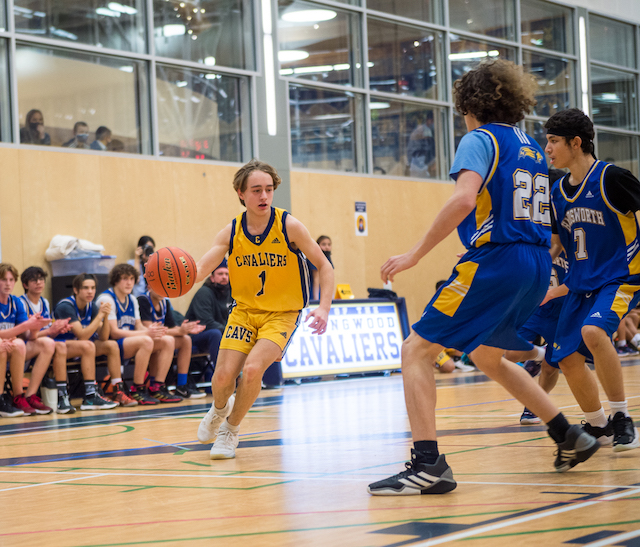 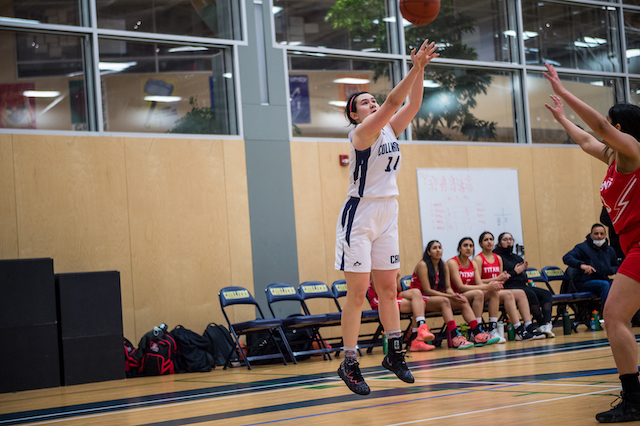 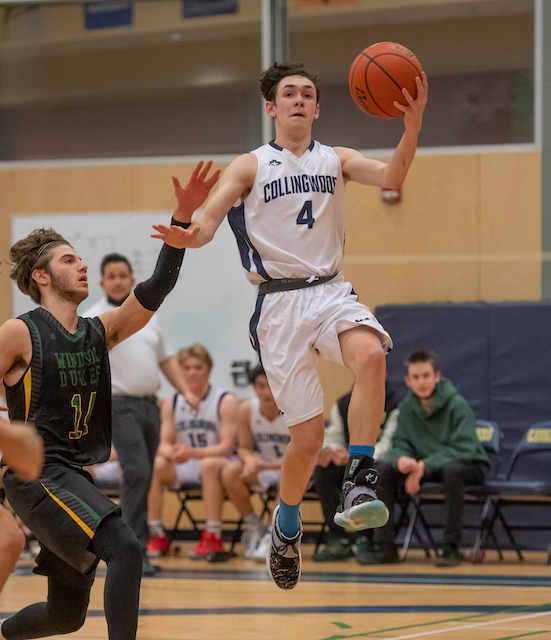 In the spring of 2020, Collingwood celebrated its senior athletes with an online Athletic Banquet due to the pandemic.  Last year, there were no sports at all so there was no banquet.  Thus, after a two-year hiatus, it was with great joy that our senior coaches got to once again fete their teams and their award winners in proper style.

As usual, the banquet was a mixture of heartfelt speeches and lively banter as coaches spoke about their team's season and the athletes that deserved special recognition.  And of course, the odd verbal jab was sent the way of other sports or coaches, which was all in good fun.

The end of the night focused on the some very special awards.  There were four athletes who received recognition as Three-Sport Athletes.  This is an award that goes to any graduating student who participated in three sports in their Grade 12 year.  This year's winners were Presley Bosa (Soccer, Basketball, Rugby), Rio Donovan (Volleyball, Basketball, Soccer), Mo Kelly (Field Hockey, Basketball, Netball), and Isaac Puar (Soccer, Basketball, Rugby).  Congratulations to these four wonderful athletes who organized their busy Grade 12 lives so they could represent the school so admirably in all three terms. 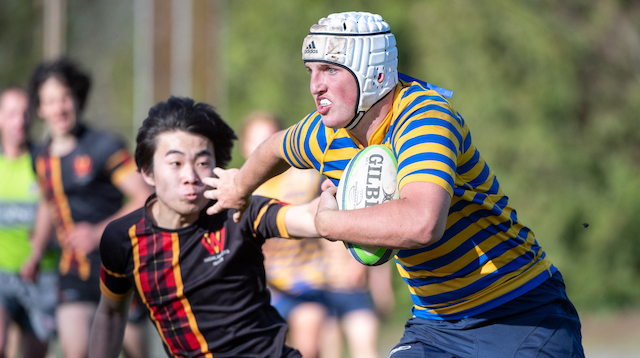 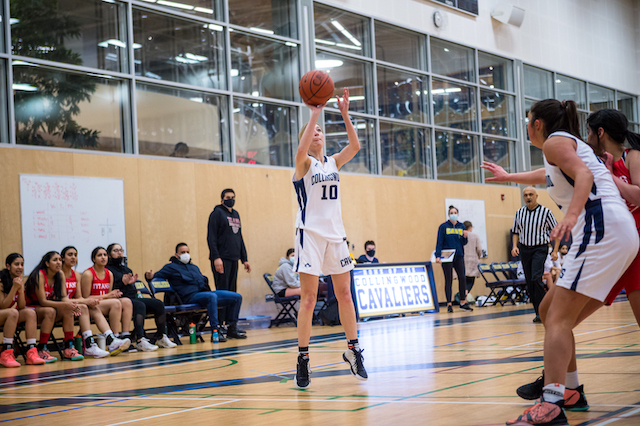 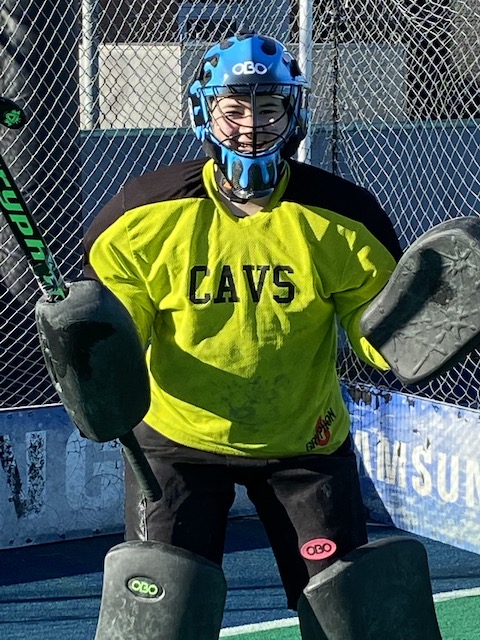 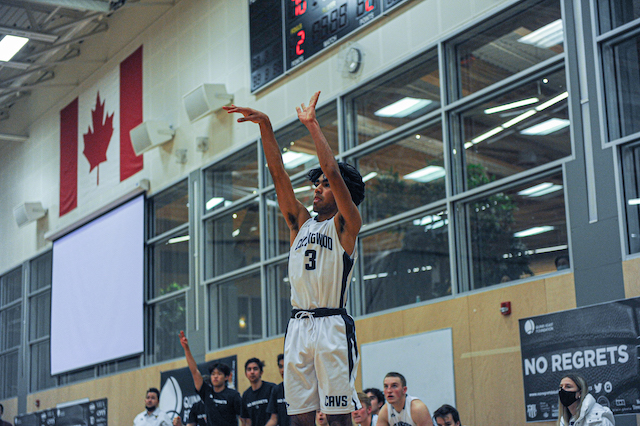 Two major athletics trophies were also given out at the Athletic Banquet:

The Sekhon Athlete-Scholar Award - For a Senior School student-athlete who best demonstrates character, teamwork, commitment, and intensity in athletic performance while maintaining the highest of academic standards.

Tanner Jackson was the very worthy recipient of the Burnett Award.  Tanner was cut from the Grade 9 basketball team, but continued to work hard on his skills and earned a spot on the Junior team the next year.  This year, he established himself as a key member of the senior team.  He also played both wing and flanker for the senior rugby team.  Throughout his years at Collingwood, Tanner has always focused on the team first and making others around him better. 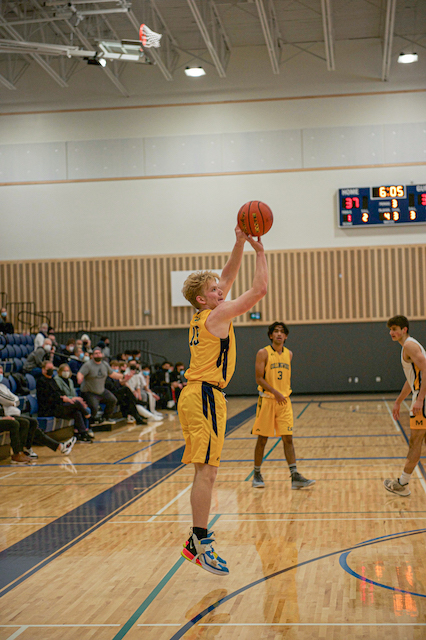 This year's Sekhon Award Winner was Tori Punter.  Tori was a member of the senior field hockey and basketball teams.  Both these teams require an enormous commitment of time and effort.  Tori was a leader on both these teams and her coaches appreciated how much she did to make her younger teammates feel welcome.  Tori is also an excellent student and a House Captain of Groos House. 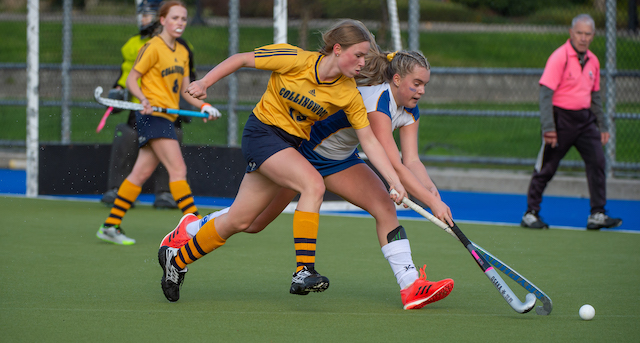 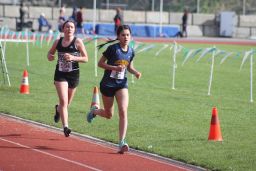 BC Championships Track and Field Report
6/13/22

The BC Track and Field Championships were held last week.  Collingwood's track stars headed out to Langley to test themselves against the province's very best.  Here is Coach McLaughlin's report of the meet:

A small but mighty squad headed to Langley to compete in the BC Track and Field Provincials. And through weather, that was wild and unrelenting, the four Collingwood athletes did their best, almost all giving personal best performances.

On Thursday, Matthew Yu competed in the Bantam boys high jump, amidst the middle of an "atmospheric river". He tried to push through the puddles, jump into the rain, and land on a soggy mat. In an event in which all athletes struggled, Matthew still managed to capture a top 15 position.

Later that evening, Elise Miller took to the track to compete in the Bantam girls 1500 m. Elise put in a gutsy performance, 3 and 3/4 laps in wind and rain, she managed to set a personal best, shaving five seconds off of her entry time!

As the day changed from Thursday to Friday, so did the weather. Bright and early Friday morning saw the sprint hurdle heats take place. Michael Scherk was the first on the track competing in the 110 m Sr boys hurdles - Heat 1. He managed to fly to a first-place finish not only in his heat but the best time in all the heats, setting him up well for the finals later in the day. Shortly after, Matthew Yu returned to the meet to race the Bantam boys' 100m hurdles. Matthew's solid run managed to qualify him for the finals as well.

Fast forward 5 hours and the finals were set. Michael ran an impeccable race and just narrowly missed capturing gold, but the silver was his fastest time yet this season an impressive 14.54s.

Matthew ran afterwards in a highly competitive group, and he should be incredibly proud of his 8th place and a PB of 16.76s.

The final day of competition saw Michael Botti come out to throw the javelin. After having a busy spring season with other sports and disciplines it was awesome to see Michael set a PB of 31.08 meters. While he had entered ranked 24th, Michael finished 17 overall - a great achievement to move up so many spots.

And so ends another track and field season. Thank you to all the athletes who dedicated their time and efforts each morning, through some exciting weather, and achieved their best in their disciplines. Thank you also to our coaches, Ms. Harbich, Ms. King-Cohen, and Ms. Power for all their time and dedication to the athletes.

Hope to see many more athletes come out next year! 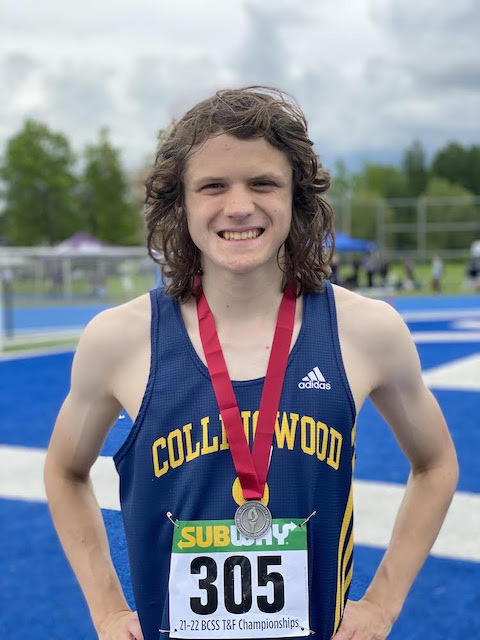 Michael Scherk with his silver medal. 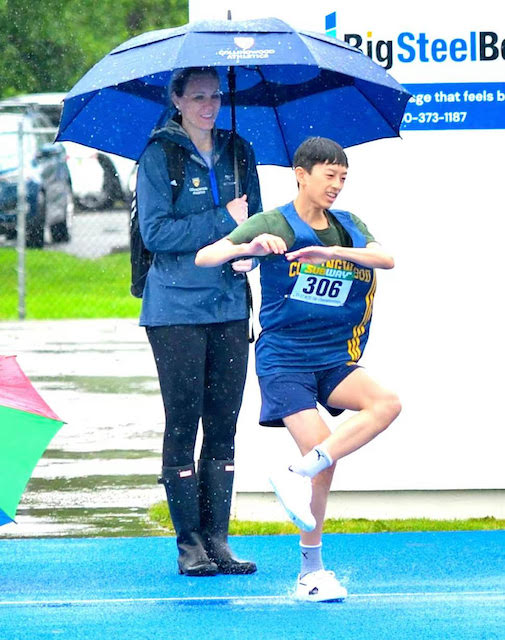 As Ms. McLaughlin seeks shelter under her umbrella, Matthew Yu warms up for the high-jump competition. 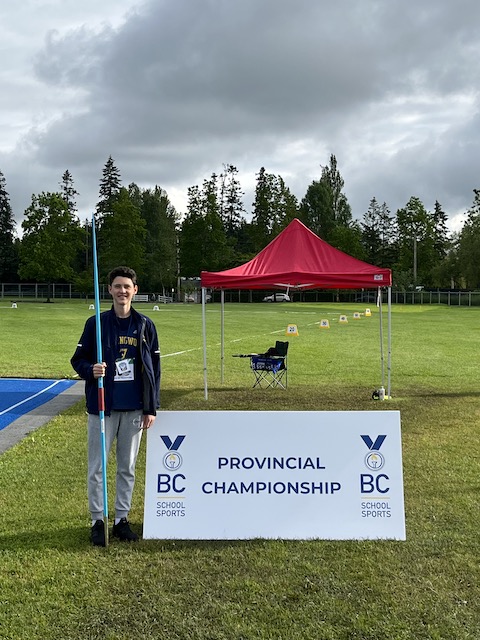 Michael Botti competed in two BC Championships this spring.  He was a member of the tennis team and then threw a personal best at the track championships. 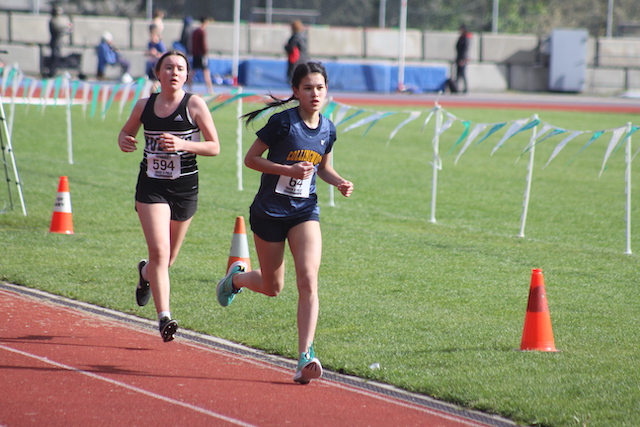 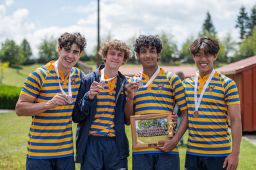 The senior rugby team experienced the highs and lows of sports in their final three days at the BC Championships.  On Thursday, the Cavs were beat on the last play of the game in the semi-final.  After regrouping on Friday, the team bounced back on Saturday morning to defeat Sir Charles Tupper 29-18 to win the bronze medal.  This was the 12th straight year that Collingwood has medaled at the BC AA Championships.

The semi-final loss was definitely tough to swallow.  With four minutes left in the game, the Cavs were nursing a 4-point lead and had one player in the sin-bin with a yellow card.  Brentwood was able to take advantage of their one-man advantage and pushed close to the Collingwood goal-line.  With Cavs in desperate defence mode, the referee then sent off another player for an offside infraction.  Brentwood surged to the goal-line again but after some forceful tackling by Collingwood, he made the unprecedented move of handing out two more yellow cards at the same time which gave Brentwood a 15-11 man advantage.  Needless to say, they scored and won the game 17-16.

On Saturday morning, the Cavs took the field with 8 starters on the bench with injuries or illness.  However, throughout the season the team had developed enormous depth so the coaches' mantra to the team was 'next man up can do the job'.  And this is what happened.  After falling behind 8-5 midway through the first half, the Cavs exploded for 17 straight points and went into halftime leading 22-8.

Collingwood opened the second half determined to increase their lead.  After a number of blown opportunities, the Cavs finally go the try they were looking for and widened their lead to 29-8.  Two late tries by Tupper were not nearly enough and team erupted in joy at the final whistle.

It really was a fantastic performance and proved that when you go into the BC Championships you will have to rely on some unsung heroes stepping to the fore if you hope to have success.

2022 AA Bronze Medalists - This is the 12th straight year that Collingwood's rugby team has brought home a medal. 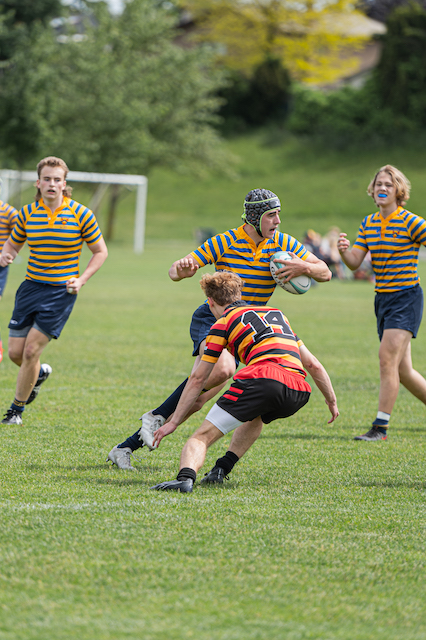 Nathaniel Fava got out of his sickbed on Saturday morning promising Mr. Larisch that he could give him 15 good minutes.  Instead he played the whole match and had the best game of his young rugby career. 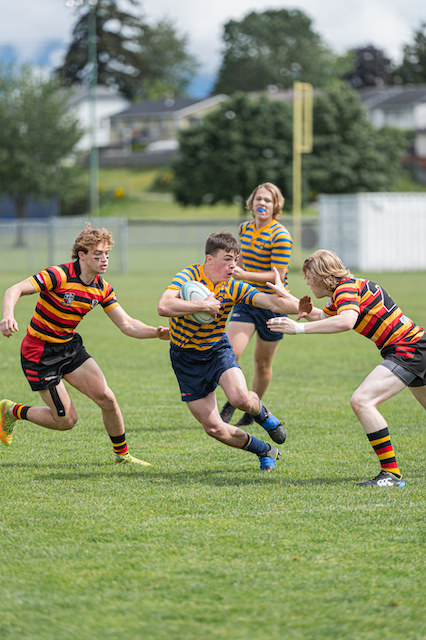 Inno De Cotiis was missed terribly in the first two games of the BC Championships.  He was a difference-maker when he was inserted into the line-up on Saturday. 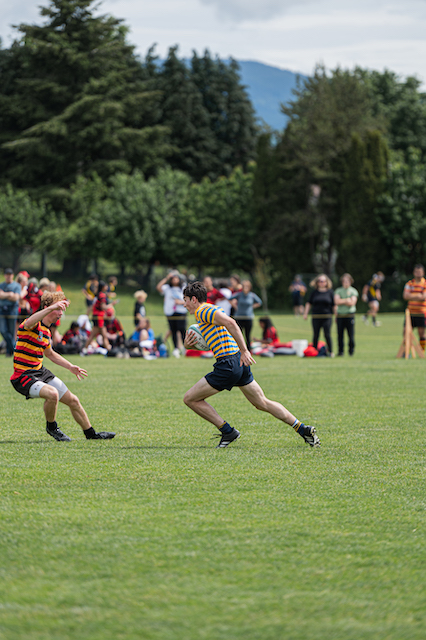 Elliot Wardle had a number of excellent runs in the bronze medal game.