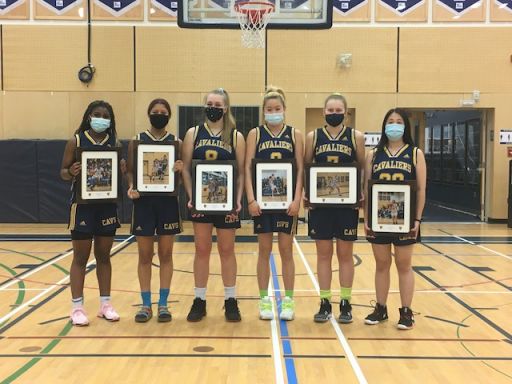 Coach Morgan McLaughlin has always done an amazing job of celebrating her Grade 12 graduating players at the end of each season.  This year's senior team had six terrific Grade 12's who would have undoubtedly led the team to a second-straight berth in the Vancouver Sea To Sky AA Zone Championships.

Sadly, we'll never know how great this team may have been.  While this is disappointing for both players and coaches, Coach McLaughlin made sure that the grads were feted in outstanding fashion with a "Covid-friendly" Seniors' Night last Friday.

Here is a summary of the night from Coach M:

Friday night saw the Senior Girls playing in their final practice of the 2020-21 season. Starting a new tradition, the graduating players were in charge of the practice, choosing all their favourite drills and games, and getting to dress up in celebratory outfits.

After practice, the Graduating players were all honoured at their Senior's Night festivities. Normally, this evening would occur after the final home game, but circumstances being what they are, the team made the best of the situation and had a lovely ceremony with the team while streaming the proceedings to the parents via the internet.

Each of the graduating players was honoured with a speech about them, a framed photo of an action shot, a bouquet and for the players who competed in all 5 years of their high school career, a commemorative gift. It was a very emotional evening as we said farewell to six very accomplished members of the Collingwood Basketball Programme.

Liz M made a triumphant return to the team last year after electing not to play last year. Liz contributed to this class's early successes as a point guard with great drives and ball handling. Her athleticism was tremendous as she defended tough opponents and initiated fast breaks.

Tiffany W played all five years at Morven, contributing and stepping up in many important games. Timely shots and pin-point passing were Tiffany's forte as she helped the group out of some tight end-game situations.

May C was a tremendous rebounder and defender for the group. Often having to battle against the opposition's biggest players, May never backed down from a challenge using her great "hops" to pull down clutch rebounds. Her offensive skills continued to develop over her 5-year career earning her the Most Improved Award in her Grade 11 year.

Stella G was the true "big" of the class – posting up and making life difficult for the other team around the hoop. Passionate and determined, Stella rose to any challenge presented to her. Her put-backs and rebounds helped keep the team within striking distance in tough games.

Rachael C was the sharp-shooting guard for the class. Going on double-digit runs, when Rachael was hot she could blow games wide open or bring the team back. Notable was a 24-point game last year when she rattled off 12 of those points in the 4th quarter to help bring the team back from a 16-point deficit. Rachael was incredibly dedicated – always last in the gym wanting to get just one more shot in.

Sara N-F was clutch all through her career with the Cavs. Lock-down D, blow-by drives, and fantastic finishes – Sara was keyed in on by other teams often receiving individual defensive focus. Athletic and driven, she was a passionate leader for her teammates every game, every season.

As a group, they leave as one of the most decorated Graduating classes of Collingwood Girls Basketball. Their tenacity, dedication, determination, leadership, and wonderful personalities will be truly missed. 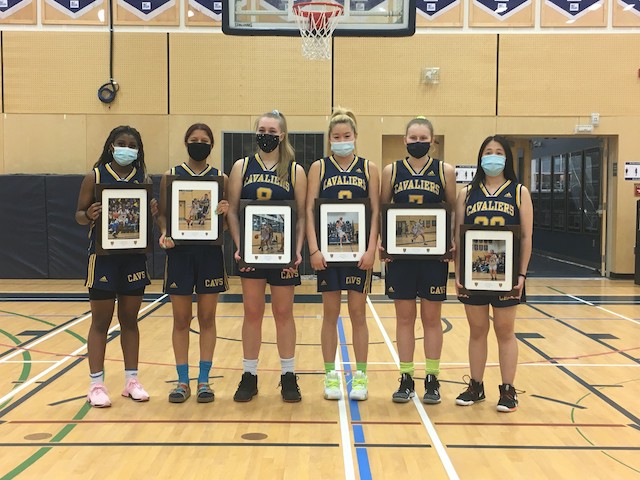 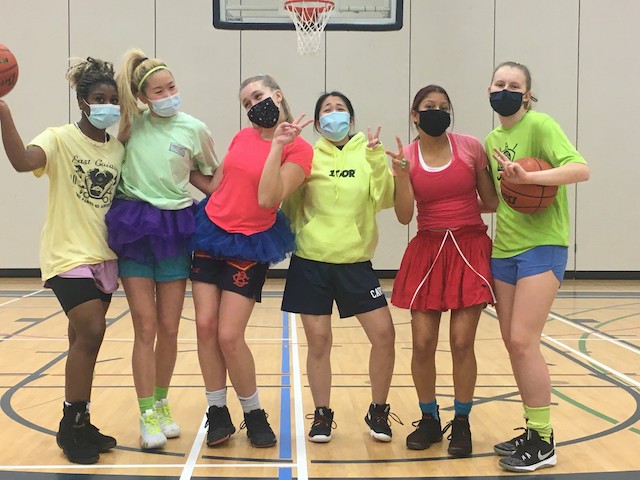 Rachael, May, Stella, Tiffany, Sara and Liz all looking resplendent in neon.