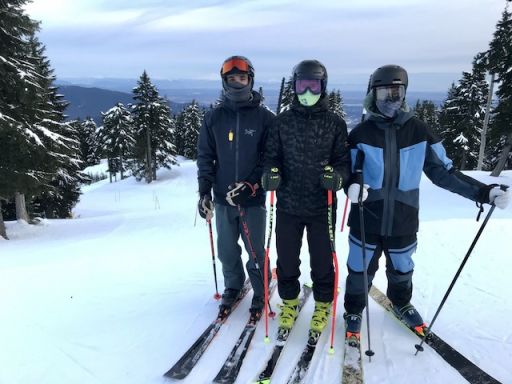 Last year when the alpine team headed home after another successful BC Championships, they were undoubtedly thinking that more glory lay ahead for many of them.  The team was losing some key individuals but the 2020-21 squad looked formidable.  Of course mere days later, the world changed completely and this year's alpine events and championships were cancelled months ago.

However, coaches Ramsden, Waterhouse and Ravensbergen were determined to give the team a chance to get on the mountains again and as a result a five-week program was run after the Christmas Break.  Here is Coach Ramsden's report:

This season brought the opportunity for students to focus on their technique, tactics and mental strength. The athletes showed dedication and determination in the hopes that they will be able to show off their developed/enhanced skills next year.

Conditions this season ranged from fresh snow and blinding wind to an arctic outflow that brought double digit negative temperatures rarely seen at Seymour. No matter the conditions, the athletes brought positive energy and looked forward to the training sessions every week. To say that these athletes improved is an understatement. In only 5 sessions, the coaching staff saw athletes go from little or no experience in a race course to calm, confident competitors who gained a need for speed.

A big thank you has to go out to the Grade 12 athletes who came to help out this year. They joined the team knowing full well that they would not get to end their high school ski career as they would have hoped. We will miss this group of Grade 12's immensely next year!

Stuart Cooper, Sam Fuller and Nic Dahl would have been the backbone of a BC gold medal contending team this year.  Despite the disappointment of no season, they still came out to lead the younger athletes.